Whiskey is a strong alcoholic beverage, often containing 40% alcohol by volume. It is a popular hard drink, but it can have dangerous effects when taken with medications. In fact, doctors would always advise people to abstain from alcohol when taking medicines.

Alcoholic drinks like whiskey are especially dangerous when combined with drugs like oxycodone. The two substances can interact in ways that magnify harmful side effects. Here is why.

Oxycodone is under a class of medications known as opioids. They are commonly prescribed to patients with moderate to severe pain. Opioids are effective pain relievers, but they come with risks.

Oxycodone and other opioids are potentially addictive. Because of this, the US Drug Enforcement Administration (DEA) classifies them as Schedule II controlled substances. Even then, many doctors still prescribe oxycodone to their patients when needed.

When used properly, oxycodone eliminates pain well, but it does have some side effects like sleepiness, fatigue, and constipation. Even then, there should not be any serious or life-threatening side effects under normal circumstances.

However, some patients do not follow their prescriptions to the letter: they take higher doses without consulting their doctors first. They do this when they feel that oxycodone is no longer as effective as the first time they took it.

When patients modify their dosage by themselves, it is a form of misuse of the drug. Eventually, that would lead to tolerance, then dependence, and finally addiction. The more oxycodone patients take, and the longer they take it, their bodies would be used to the presence of the drug in the body. Later on, they can no longer function normally without the drug.

Patients who take oxycodone in large amounts will experience effects such as:

The last effect is particularly risky. In some cases, breathing would completely stop, leading to death. 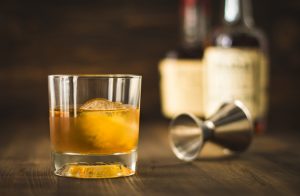 Similarly, under normal circumstances, whiskey poses no serious threat to drinkers. When people drink moderately, this beverage does not cause harm. However, drinking a large amount of whiskey in a short time leads to intoxication.

How much is too much? One drink of whiskey is typically defined as 1.5 fluid ounces. Drinking more than that volume per hour will strain the liver, as it cannot process that much alcohol at a time. In turn, drinking that much can already cause people to get drunk.

People who drink whiskey heavily will experience the following symptoms of intoxication:

Also, drinking excessive amounts of whiskey may cause alcohol poisoning. This is a potentially fatal event that requires immediate medical attention.

What happens if whiskey and oxycodone are taken together?

Patients who are on oxycodone prescriptions and drink whiskey at the same time are at risk of the following side effects:

Both oxycodone and whiskey, when taken in large amounts, can slow down breathing. Taken together, this effect is magnified, posing an even greater threat to people’s lives. If these symptoms are not addressed promptly, respiratory arrest can occur. In other words, breathing will completely stop and would soon lead to death.

Cases of overdosing on alcohol and oxycodone, as well as other prescription opioids, have been on the rise in the US. Many people are suffering from opioid addictions, and often they also drink alcohol at unhealthy levels. With that, they expose themselves to much greater risks of coma, respiratory arrest, and the other harmful side effects of combining oxycodone and alcohol.

Even patients who take oxycodone strictly following their doctors’ prescriptions are vulnerable. Some of them drink whiskey while on medication, and even the smallest amount of alcohol can enhance the side effects of both substances. In turn, they can still experience intoxication and overdose symptoms.

Mixing whiskey and oxycodone also has effects that are less deadly, but still risky. For instance, alcohol intensifies the sedating effects of oxycodone. In turn, this causes loss of alertness, making people more prone to falling, bumping into walls, hitting their heads, and other accidents. When these individuals are driving in such a condition, the risks are even higher. In some cases, individuals who take oxycodone and drink whiskey can lose consciousness all of a sudden.

How can whiskey and oxycodone overdose be treated? 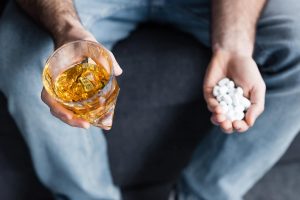 When patients present to the emergency room with cases of oxycodone overdose, doctors now give them a life-saving drug called naloxone. This drug blocks oxycodone molecules from reaching their targets in the brain, reversing the dangerous side effects. After naloxone is administered, patients can breathe normally again.

However, the effects of naloxone are short-lived. Additional medical care is required for cases of oxycodone overdose. The substance must be fully flushed out of patients’ bodies to ensure a full recovery.

While naloxone is effective in halting the fatal side effects of oxycodone overdose, it does nothing to address alcohol poisoning. In this case, medical professionals often use a range of treatments like activated carbon and stomach pumps to eliminate excess alcohol from the body.

When patients combine whiskey and oxycodone, the side effects of both substances need to be treated promptly. They may suffer overdose symptoms that are much harder to treat, putting their lives at greater risk.

To avoid any potentially deadly effects, it’s important to avoid drinking alcohol along with any opioid medications. In fact, when patients are prescribed any kind of medication, it is always advisable to abstain from alcohol.

Doctors must always inform their patients of the dangers of drinking alcohol when taking prescription medicines. After the prescription is over, patients should also consult their doctors first before deciding to drink alcohol again. This way, patients can ensure that it’s already safe for them to drink.