Ativan is a benzodiazepine drug often prescribed for treating anxiety disorders, panic attacks, and seizures. It has the generic name lorazepam. Similar drugs in the benzodiazepine category include Xanax (alprazolam), Valium (diazepam), and Klonopin (clonazepam).

The mode of action of Ativan and similar benzodiazepines is through changing the levels of gamma-aminobutyric acid (GABA), a neurotransmitter with an inhibitory effect. As a result, the drugs decrease excitation in the brain and spinal cord. In turn, symptoms of panic, anxiety, and seizures are relieved.

Ativan, like most benzodiazepines, has the potential to cause physical dependence. In fact, the US Drug Enforcement Administration (DEA) classifies benzodiazepine drugs as Schedule IV drugs. This means the drugs have legitimate medical uses, but they can be abused as well.

If you try to stop taking this drug, you may experience withdrawal symptoms, especially if you have become physically dependent on it already. If you want to know what the symptoms of Ativan withdrawal are and possible treatments for them, read further.

What are the symptoms of Ativan withdrawal?

Withdrawal from Ativan has an acute phase and a prolonged phase. The second phase is also known as withdrawal syndrome in some references.

The acute phase is the first stage of withdrawal. You will experience these symptoms at this stage:

Following the acute phase is the second stage, which is a more protracted period of withdrawal. This lasts longer than the acute stage. It is characterized by these common symptoms:

In some cases, depression, mood swings, and other psychological symptoms may even last for months or years after Ativan use has been discontinued. This is known as Post-Acute Withdrawal Syndrome or PAWS.

At some point, the withdrawal symptoms may become so unbearable that your only option is to take the drug again to feel relief. For that reason, it’s much more difficult to stop taking Ativan once you have become physically dependent on it.

How soon does withdrawal set in? 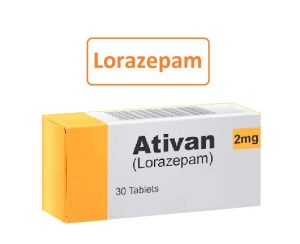 Generally, the onset of withdrawal symptoms is within 48 hours of stopping Ativan use. You may also experience rebound symptoms of insomnia and anxiety at this time. These symptoms may even appear within just hours of the last dose.

About 75% of people experiencing withdrawal from Ativan will develop a few acute symptoms. Many of these begin to die down within 2 to 4 weeks.

If you have successfully abstained from Ativan, there is still a chance that you may experience a longer period of withdrawal. Various types of post-acute withdrawal symptoms have been reported to last for up to 12 months after Ativan use has stopped. Commonly reported symptoms include:

Physical symptoms may also occur in post-withdrawal. These can be persistent and bothersome. Typical examples include:

Take note that the duration and intensity of withdrawal can vary for different people. These are often influenced by these factors:

As a rule of thumb, the longer you have been on Ativan, the more intense your withdrawal will be. This will be compounded if you have been taking high doses of the drug or if you were taking it frequently.

Additionally, any physical or mental health conditions you have can make withdrawal more severe and prolonged. If you have been taking other drugs along with Ativan, the effects can be worse.

Why does withdrawal occur?

As you keep taking Ativan, your body becomes tolerant to its effects. Over time, you may feel the drug being less effective, prompting you to want more of it to achieve the same effects as before. Eventually, your body will become dependent on Ativan, and the moment you stop taking it, withdrawal symptoms will show up.

Withdrawal symptoms are the result of your body struggling to adjust to the sudden absence of Ativan. They will persist until your body has fully adjusted to having none of the drug inside your system. It takes time for your body to adjust, which is why withdrawal symptoms last for days, weeks, or even months in some cases.

What are the treatments for Ativan withdrawal?

Safely quitting Ativan is best done with professional help. In a process known as medically-assisted detox, you will be assisted by medical professionals as you slowly reduce your dose of Ativan. Stopping intake right away (otherwise known as quitting cold turkey) is not advisable, as it can worsen withdrawal symptoms. Instead, your dose of the drug is tapered gradually until your body can tolerate taking none of it at all.

You may still develop withdrawal symptoms during detox. To help you out, doctors may give you certain medications to ease specific withdrawal symptoms. For example, you could be given sleep aids like melatonin to counteract insomnia and painkillers to deal with muscle aches.

Once detox is over, your body has already adjusted to the complete absence of Ativan. But you may still have drug cravings, anxiety, and other psychological symptoms. For a full recovery, you will have to undergo behavioral therapies. Examples of these are:

The aim of these therapies is to train your brain to think sober again. For instance, when you’re stressed, the first thing that should cross your mind is not drugs, but a healthy coping strategy. Instead of reaching for that bottle of Ativan, your go-to stress reliever could be exercise, sports, or a new hobby. Behavioral therapies will also help you to actively avoid anything that will trigger your desire to take drugs. That way, you can take back control of your life once again.